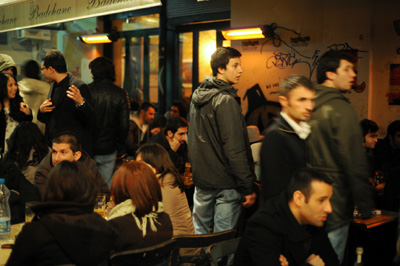 [1]
One recent Wednesday night found us outside of Badehane, in Beyoglu’s Asmalimescit area, packed in like sardines. We were pleasantly pickling ourselves with raki while listening to the sweet sounds of clarinet virtuoso Selim Sesler and his Roma orchestra when someone at an adjacent table said, “This place used to be cool, but now…”

Having a look around Asmalimescit these days, it’s easy to get nostalgic for a time when this little district was a bit less developed. Now, Sofyali Street seems to have become a Nisantasi-inspired fashion show runway for the bridge and ferry crowd – Lady GaGa look-alikes accompanied by gawkers snapping iPhotos of themselves while lounging on high bar stools.

But Asmalimescit wasn’t always filled with stools. Long before the chic descended upon these streets, the old school meyhane purveyors Refik and Yakup had set a gritty stage to which Babylon, arguably the city’s best live music venue, provided the edgy back beat. Little Wing twirled in, hosting open didgeridoo jam sessions. A quirky man in a fedora held court over a quirky bar called Kumsaati. Everyone smoked inside so the street belonged, largely, to the pedestrian. But on any given Wednesday night, the street in front of Badehane was filled with dancing bodies, and the occasional clarinetist.

For ten years, this corner dive and its sea of rickety tables has been a social anchor for Turkish and foreign neo-Bohemian strays of Beyoglu. “When I opened this place, I planned to make some simple home-cooked for the people in neighborhood. It was supposed to be a restaurant. Within a couple of months people started calling it their neighborhood bar and that’s what it ended up being, ” said the owner, Bade Uygun.

Though Bade has cleaned the place up a bit in recent years, the beer and raki still go for a song. Selim bey and his magic clarinet still light up the night on Wednesdays. Tatavla Keyfi, a rembetiko revival band led by a Greek musician play on Tuesday nights. On nights without live music there’s a often DJ, but we prefer to sit outside, people watching and silently counting our blessings that there is still at least one place in Asmalimescit to enjoy unpretentious camaraderie over a few cheap beers.

So to the Badehane nay-sayers we say, give it another try. You may have to shoulder your way there but you’ll still find this time-honored Beyoglu dive bar largely unchanged and still very cool.