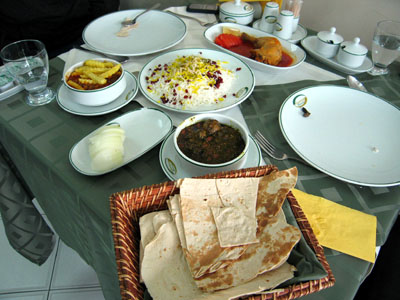 [1]
Considering the fact that Iran is a next door neighbor to Turkey and that so many Iranians call Istanbul home, we’ve always found it more than a bit baffling that there are hardly any Iranian restaurants in the city. Imagine New York with all but a handful of Mexican restaurants? The one Iranian restaurant in town that we did know about – a tourist-oriented place with an in-house musician who played “Hava Nagila” on his zither – mercifully closed down years ago.

Several months back, though, we caught sight of a sign by the side of the road in Persian script. Intrigued, we looked closer and realized that it belonged to a restaurant called Asuman, run by a nearby travel agency with the same name that specializes in trips to Iran.

Asuman’s location – just on the edge of the Laleli neighborhood, a wholesale clothing district where many Iranians come to shop, and of Aksaray, a district popular with migrants – seemed to indicate that this might be a place that serves homesick Iranians, rather than gawking tourists.

With visions of steaming, saffron-infused rice pilafs filling our heads, we recently returned to Asuman to try things out. After climbing a short set of stairs, we entered a small, fluorescent-lit dining room that overlooks Ataturk Boulevard, a busy thoroughfare that runs through the heart of the area. The room was decorated in a style that hovered somewhere between tacky and elegant, with light green tablecloths on the tables and chairs upholstered in brown fake leather. There was no zither player, although Persian music was playing in the background.

The one-year-old restaurant, we found out, has a chef from the northern Iranian city of Tabriz. Most of its business involves catering private functions for Istanbul’s Iranian expat community (the previous night, they prepared food for an engagement party with 200 people).

The menu, meanwhile, was short and to the point. A few soups, kebabs, pilafs and stews – a kind of Iranian greatest hits collection. We decided to skip the kebabs and go for some of the other dishes on the menu, starting off with a refreshing cold yogurt-cucumber soup that was topped with chopped walnuts and golden raisins. That was followed by khorost gheymeh, a tomato-based stew made with yellow split peas (and, somewhat incongruously, topped with crinkle cut French fries), and ghormeh sabzi, a stew made with chopped greens and kidney beans. Both dishes (15 lira each) had a dark orb swimming in the middle – a preserved lemon, it turned out – which gave the stews a funky, but pleasant musty hint.

Along with the rib-sticking stews, we also ordered two pilafs – one topped with chopped pistachios, barberries (red currant-like dried berries with a piquant taste) and a crown of vivid yellow saffron-colored rice, and another that was infused with dill and fava beans. Both were very tasty. Stuffed to the gills, we finished off our meal with a glass of strong tea.

The search for more Iranian spots will continue. For now – until we can find another one – we declare Asuman our favorite Iranian restaurant in Istanbul.