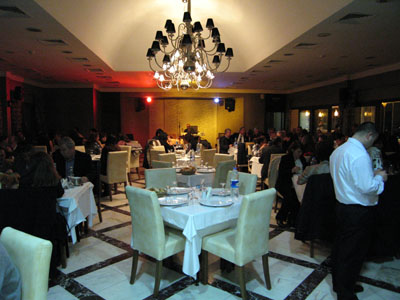 Like Atatürk statues and crescent-and-star flags etched into the sides of mountains, the öğretmenevi (“teacher’s house”) is an integral part of the Turkish landscape. Found in almost every city in Turkey, these government-run institutions serve as affordable guesthouses for educators on the road and – since anyone is welcome if space is available – for those traveling on a teacher’s budget.

For the most part, these guesthouses are drab affairs, 1970s-era concrete boxes usually painted in a shade of pink and found in some of the least interesting parts of town. Not so in Istanbul’s historic Beyoğlu neighborhood, where the local öğretmenevi is a grand, late-19th-century building, formerly a French-built hotel that – just like the more famous Pera Palace Hotel nearby – put up travelers arriving on the Orient Express.

A “teacher’s house” since the 1980s, the building received a complete remodeling two years ago, which resulted in the addition of a top-floor restaurant and bar. We walked by the building on a recent afternoon and were intrigued by its sign, which looked more like that of a boutique hotel’s than of a state-run institution. The lobby smacked of a Miami Beach retirement home, but a quick trip up the elevator took us into a modernish dining room that had several tables with fine views of the waters of the Golden Horn (the poor man’s Bosphorus, some might say) and a cozy, five-stool bar at one end.

Curious, we returned for dinner to find out just what Istanbul’s teachers are up to at night. We were initially met by a stern maitre d’ who, treating us like a bunch of students who had arrived late for detention period, informed us that no tables were available. Apparently, reservations are a must on most nights, especially if you want one of the few tables with a view. Fortunately, the bar was empty and the friendly bartender – dressed in a white shirt and satiny black tie, like the rest of the waitstaff – was happy to let us eat there.

The menu held no surprises – the usual mezes and kebabs, along with grilled fish – but the prices (most main dishes were around 12 TL) were unheard of for this swanky part of town, especially for a place with a view. The lamb chops we ordered were not exceptional, but, like the meze, no worse than anything you get in any of the meyhanes along Beyoğlu’s touristy Nevizade Street. “Mexican steak,” a fillet of beef covered in a tomato-mushroom sauce and melted cheese, seemed like a high-concept take on school cafeteria food, but was surprisingly good.

The truth is, more than the food, what might keep us coming back to the öğretmenevi is the unpretentious bar and its wonderful view, especially come summer, when the restaurant’s big windows will be opened up. It may not be the finest dining experience in Beyoğlu, but it is certainly one of the more memorable. At one point during our dinner at the öğretmenevi, the lights dimmed, a one-man band at his keyboard started playing Turkish favorites, and the full house of teachers started singing along, for a moment forgetting that come tomorrow, another school day begins.