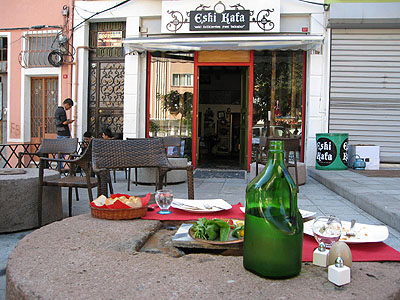 An ironic wink and nudge come with the restaurant name Eski Kafa, which is also a Turkish term for “old-fashioned to the hilt.” This little eatery, with its Zen lodge décor and signage boasting “all natural,” “organic” and “without hormones,” is also decidedly new-age – to the hilt. Previously an organic fruit and vegetable stand, Eski Kafa, owned by a children’s book author and his interior designer wife, keeps a slow food agenda on the table with traditional Turkish dishes prepared fresh with what’s in season.

Seated at one of the handsome millstone-cum-tables out front, we were first struck by the quiet of the Fatih District’s At Pazarı, a wide plaza closed to traffic and one of the most serene spots we’ve happened upon in the old city. In Ottoman times, this strip was a thriving horse trader’s market, but nowadays, only a few old men may shuffle by on their way to the café, while a group of kids in Donald Duck-like school uniforms wander home from school. Resist the temptation to curl up for a nap in this dreamy place; there’s a serious menu on the table.

On a recent visit, we started with a few of the cold appetizers, most notably the kuru patlıcan dolması, or dried eggplant stuffed with spicy rice. As the boisterous chef explained, “Show me a fresh, natural, local pepper or eggplant after the season is over! There are none, so in the winter we use dried ones, like our mothers and grandmothers used to do.”

The stuffing was just spicy enough to elicit an arch of the eyebrows, focusing our attention on the rest of the construction. The dried eggplant casing – unlike the limp vehicle of a stuffed fresh eggplant – looks like a mortar shell and has the strength to withstand fierce stuffing. The result is a denser dolma that really packs a wallop.

Passing on the Turkish menu mainstay, mercimek çorbası, or lentil soup, we went with one we’d never encountered, the yüksük çorbası, or “thimble soup.” This specialty of Adana, a city in Southern Turkey known for its flavorful cuisine, came packed with homemade Turkish dumplings and chickpeas in a spicy broth that almost reminds one of Chinese hot and sour.

From the main courses, a dish called gulaş caught our attention. “Is that like Hungarian goulash?” we asked the waiter. He held up a finger in pause and summoned the owner from inside. After being informed by the owner that, in fact, this gulaş is an original Turkish recipe of no direct relation to Hungarian goulash but, at the same time, possibly the ancestor of the more celebrated Hungarian one, we just couldn’t resist an order. Unlike the soupy Magyar variety, gulaş à la Turca is composed of ever-tender slow roasted strips of beef seemingly dry-rubbed with spices and wrapped in bay leaves. The flavor was quite intense and concentrated.

The original goulash or not? That is debatable. But everyone at our table agreed that this was one of the better roast beef dishes we’d had in Istanbul, rounding out one of the most unexpected lunches to be found in the “old-fashioned” district of Fatih. Though their slow food credo and laid-back service might be more appreciated in upmarket neighborhoods elsewhere in Istanbul, there is a certain feng shui over at Eski Kafa that we hope will never change. With a long lunch followed by a stroll through Fatih’s boisterous Wednesday street market that begins just up the street, you’ll be feeling it too.