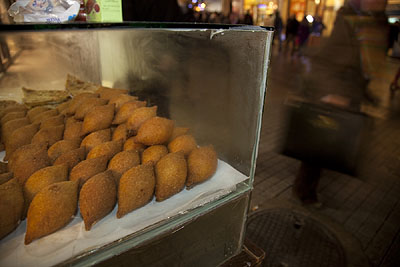 Editors’s note: This is the final installment in our (highly subjective) look at Istanbul’s top five street foods.

For years on İstiklal Caddesi, just beyond Galatasaray High School, in one calm spot stood the beatific Ali Bey, an angel in a white doctor’s coat offering salvation in the form of golden fried içli köfte. Though he passed away recently, Ali Bey left his post and his streetside stand – as much a part of the İstiklal streetscape as the red trolley cars that run up and down the boulevard and the belle époque apartment buildings that line it – to his son, who fills it with the same panache, white jacket and all. And thanks to Ali Bey’s wife, Fatma Hanım, the içli köfte lives on.

Known as kibbeh in the Arab world, içli köfte is a savory snack consisting of a bulgur wheat shell that holds a filling of ground meat, onions, parsley and spices. These little torpedoes are handmade upstairs by Fatma Hanım, who spends most of the day at a large table with her daughter-in-law working the stuffing into the casing before passing them on for final preparation. They chat and laugh as they work, their hands working by what appears to be instinct alone – a scene more reminiscent of a rural family kitchen than a dining room with a view of one of Istanbul’s best-known streets. Though also served boiled (in the Sabırtaşı restaurant five flights up from the streetside stand), we prefer the ones served on the street – fried to perfection, crunchy but not too greasy on the outside and moist on the inside. Unlike many of this city’s içli köfte, which often look and taste like a fried mini football, Sabırtaşı’s are a refined delicacy. It’s as if each grain of bulgur and every bit of filling were specifically designed to rise into a spicy, steamy, heavenly waltz across the palate as the fortunate snacker breaks the crunchy seal of the outer crust.

There’s a time and place for a wet burger, a season for the cucumber. A simit hits the spot if its oven hot and even kumpir has its moments, but Sabırtaşı’s içli köfte gets our vote for the number one street food in Istanbul because it’s, well, the best.