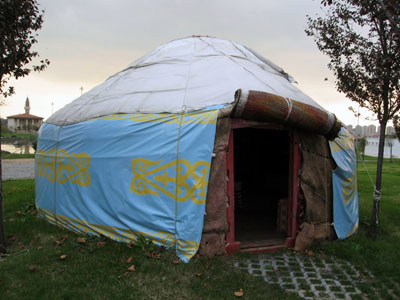 There are those restaurants worth going to because of their out-of-the-way location – a fish shack at the end of a lonely beach, a fondue hut at the top of an Alpine ridge. Then there are those worth seeking out despite their location – that culinary gem stuck inside a God-forsaken strip mall, a sensational steakhouse in the back of a gas station.

But we’re not quite sure in what category we would place Zinnet, an appealing Central Asian restaurant located deep inside a newly created park just outside Istanbul’s old city walls. On the one hand, the surprisingly large park that is the restaurant’s home is one of the few green spaces to be found in Istanbul. On the other hand, the park itself is hemmed in by several noisy highways and has a desolate, almost surreal feeling to it. On a recent fall day, it was populated with more stray dogs than actual people.

Although the green space is called “Kültür Parkı,” the only sign of “culture” that we found was a derelict amphitheater overgrown with weeds. The restaurant itself is located inside a borderline bizarre compound that’s home to a gaily decorated yurt and several small wooden buildings that act as mini showcases for the various Turkic republics of Central Asia – a kind of pint-sized, poor man’s Epcot Center.

Still, we’re suckers for the hearty food of Central Asia – surprisingly hard to find in Istanbul, despite the proximity and strong ethnic bonds to the region – so we hopped on the tram the other day and headed to Zinnet to check things out.

The restaurant, run by a Uighur family from the city of Urumqi in Western China, is inside one of the buildings of the Kültür Parkı’s Turkic republic complex and has an airy, slightly upscale feel to it. We were a bit concerned when we first arrived. Like the Kültür Parkı itself, Zinnet was devoid of any human presence, except for a Kazakh woman who serves as the restaurant’s waitress and hostess. The extensive menu, though, a kind of Silk Road culinary greatest-hits collection, was promising. Things started looking up as soon as a small – and very tasty – complimentary salad arrived (along with a group who started watching a Uighur musical on a large television screen mounted on one of the walls). Made of thin slivers of a crunchy vegetable we couldn’t recognize (uncooked potato, it turned out!) that were bathed in a red pepper and sesame oil dressing, the salad packed a flavorful and satisfying punch. A soup called çüçüre, made of a spicy broth that had delicious little tortellini-like meat-filled dumplings floating in it, hit the spot on a chilly day.

Zinnet’s Uighur-style mantı, gyoza-sized steamed dumplings filled with roughly chopped fatty meat and topped with zingy malt vinegar and spicy pepper oil, were outstanding. The fragrant zireli kebap, a stir-fry of beef and onions, had the look of a Chinese dish but the earthy spicing of a Middle Eastern one. We ended our meal with an order of lagman, the handmade noodle dish that is a Central Asian staple. Although good, the noodles lacked the depth of character of those made by the cook at Doğu Türkistan Vakfi Aş Evi [1], a no-frills Uighur restaurant we reviewed a few months ago.

With main dishes averaging around 15 lira, Zinnet might seem a bit pricey, at least considering the rustic style of the food. Then again, since the only other way to taste what Zinnet serves would be to book a flight to Tashkent or Kashgar, think of the place as an absolute bargain – with a great location, to boot.

Note: To get to Zinnet, take the Kabataş-Zeytinburnu tramway and get off at the Topkapı station, just outside the city walls (not near Topkapı Palace). Take the stairs up from the tram station and head north and into the Kültür Parkı. Look for the collection of small buildings and the yurt straight ahead.