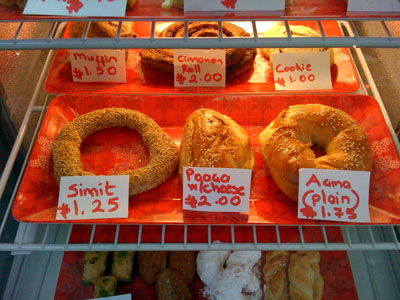 We recently posted [1] about the arrival of the simit – the sesame-encrusted bread ring that it is a Turkish street food staple – in Manhattan, where it is being baked on location at the newly opened New York outpost of Güllüoğlu, an Istanbul baklava maker (not to be confused, as we initially did, with the legendary Istanbul baklava house [2] also called Güllüoğlu). When we first posted about it, we (half) jokingly suggested that the simit might give the bagel a run for its money. But now it turns out that the Güllüoğlu simit’s biggest competitor might turn out to be… another simit!

From tipster S.R. we just got the news that another spot in Manhattan – downtown’s newly opened Ashley’s European Bakery (96 Chambers St.) – is serving up freshly baked simit. In fact, Ashley (née Aslı) is not only baking simit, but also other Turkish breakfast pasteries such as poğaca (poh-ah-cha) and açma (atch-mah). The bakery had run out of simit on the morning of our tipster’s visit, but she did have a spinach and cheese filled açma, which she said was “delicious.”