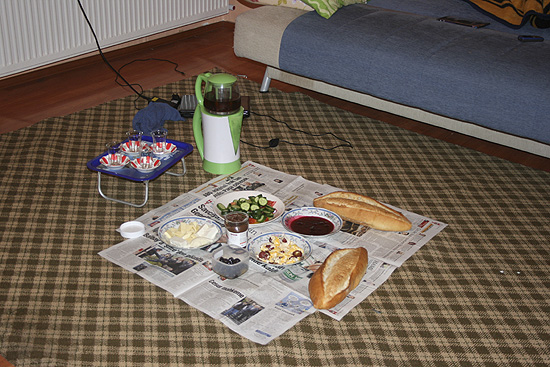 After going through numerous worthy entries, we are happy to announce that we have picked the winner and the two runners-up in our first ever photo competition. The subject of the competition was simple – “Istanbul food culture” – and the entries covered it from a variety of angles.

Today we are happy to present the competition’s second runner-up: “Young Boys Brunch” by Katarina Matyasova of the Czech Republic. Here’s what she had to say about the photo:

The photo “Young Boys Brunch” is taken in Istanbul, in the apartment of my friends (who don’t have a table and as I learned later it’s normal in young boys’ households).

I took the picture just in the moment before we started to eat this tasty brunch, set on the floor. Using newspaper for “setting the table” I found very practical – you can read the news and talk with friends at the same time – but what’s more, you clean the “table” so easily after all.

Istanbul became part of my heart because of its atmosphere and the people I met there. I came to Istanbul several times because of the boy who made this brunch. Although our ways have already separated I keep nice memories.

Congratulations to Katarina and come back on Wednesday to see the photo of the first runner-up, and on Friday for the winner.