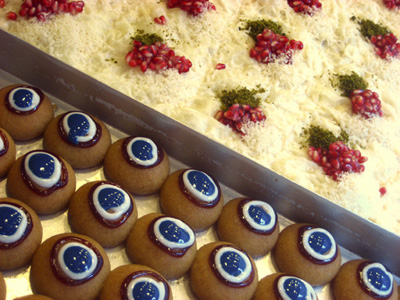 The first runner-up in our photo competition is “Nazar Cookies,” by WenLin Soh. (You can see the photo that won third place here [1].) Originally from Singapore, she is currently on a one-year sabbatical which she is spending eating her way around the world, including some stops in Turkey. We asked her about the photo and she had this to say:

Where was the photo taken?
Olimpia Patisserie, Sıraselvilar Caddesi 117, Taksim

What attracted you to take this photograph?
I had seen the nazar boncuğu design everywhere in Istanbul, on house decorations and trinkets large and small alike. But this was the first time I had seen it on something edible – a semolina cake, which I understood to be a popular Turkish dessert, though less “stereotypical” than Turkish delight or baklava.

Also, I understood that the nazar boncuğu is traditionally used as a charm to ward off the curse of the evil eye, usually linked to ill-will radiating from the envious. In which case I found this pastry diplay to be quite funny because surely the yummy semolina cakes were going to invoke envy rather than disperse it!

What was the moment you were trying to capture?
A delicious and colourful display of signature ingredients in Turkish desserts: the red of the pomegranate, the green of the pistachio and the less expected blue of the nazar, on a canvas of brown semolina and white rice flour noodles. Put together, it said to me with one glance: “Delicious and distinctively Istanbul.”

Please tell us something about yourself, and your relationship to Istanbul?
I first visited Istanbul for a long weekend in Spring 2008. Between meals at Körfez, Changa and köfte carts, I fell in love with the vibrant food culture of the place – its use of fresh and simple ingredients and its tapestry of complex tastes.

So when my husband and I decided to take a one year sabbatical to go (and eat!) around the world, Turkey was a big, fat destination on our list. We ended up spending two weeks this time around, going overland between Istanbul, Kıyıköy, Göreme and Antakya. We don’t feel like we’re anywhere near done yet, so we’ll be back, sometime!

I was born and bred in food-mad Singapore, and most recently lived and worked in London. Updates of our edible shenanigans on the road can be found on www.goingwithmygut.com [2]