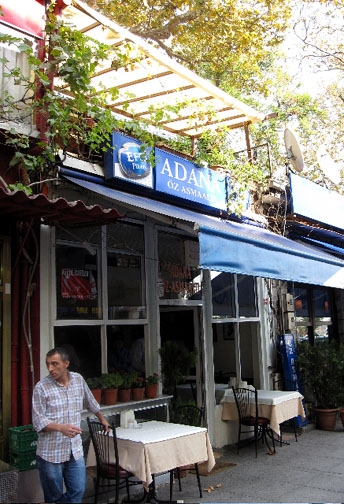 In London or New York, one could spend hours before lunch deciding among Eritrean, Guatemalan or that Jamaican jerked chicken joint on the corner. The choice in Istanbul, for the most part, is comfortingly simple: “fish or meat?”

On one recent lunch run we had with Mehmet Bey, an Asian-sider who acts as a human divining rod for local eats, the pick was meat – or, to be more specific, Adana kebap over at Adana Özasmaaltı on the waterfront in Bostancı.

There is no poring over a labyrinthine menu in this place and no anxiety about what to order. Folks come here to eat Adana kebab, the spicy ground lamb kebab that hails from its namesake city in the south of Turkey, and they come often. Regulars know the waiter’s name and he knows if they like their şalgam (turnip juice) spicy or not, and how many cubes of ice they want in their rakı. With its walls lined with photographs and tiny vine-laden terrace upstairs, the place feels like a local clubhouse, one whose crest would be two crossed skewers.

In Istanbul, where Adana kebab is as common as chicken wings are in Buffalo, it’s not easy for a kebapçı to stand out in the crowd, as Adana Özasmaaltı does. What’s their secret? Turns out it’s fairly basic. As the grill man there explained, “For 35 years we’ve been making Adana kebab from good, hand-cut meat, with sumac and onions on the side and fresh lavaş. That’s the way it’s done in Adana, so that’s how we do it.”

As simple as that sounds, the result is unusually complex and quite different from most Adana kebab in Istanbul. After a quick palate-cleanser of sharp, arugula-like greens and cool, white slices of radish to start things off, the kebab arrived at the table still sizzling. It was three fingers wide and nearly too long for the plate. The paper-thin lavaş underneath had already started to disintegrate where the kebab’s juices gathered. The skin of the quartered and grilled tomato that came with the meat had split and blackened like a marshmallow over a campfire. On the side sat a beautiful little plate of lilac-colored onions spiked with sumac. This is the sort of image that we imagine inmates from Adana blow up to poster size and hang on the walls of their cells, counting the days.

We loaded up our palms with lavaş and went to work, laying down a trail of onions on the flat bread and topping them with grilled pepper and then the Adana kebab, which almost crumbled with the nudge of a fork. The tang of the onions hit first in a cool blast, opening the way for the smoky heat of the red pepper-riddled Adana. Three bites later, fresh lavaş in hand, we were back at it. This time around, thanks to a little restraint on the onions, the quality of the meat came through along with its textural subtleties. And that rich flavor? A little fat from the tail of the lamb. After all, that’s the way it’s done in Adana.