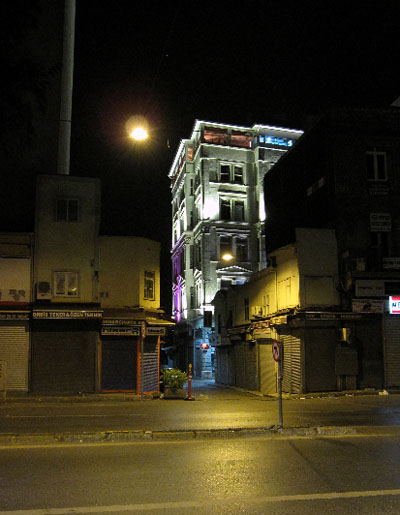 Editor’s note: Due to a number of troubling reports, we can no longer recommend this restaurant. Though the view remains as fine as ever, it seems the kitchen is no longer holding up its end of the bargain. The good news is that Tarihi Karaköy Balıkçısı [1], located just downstairs from Grifin and open during the daytime, remains as good as ever.

In Karaköy’s Perşembe Pazarı, a historic commercial district on the shores of the Golden Horn, the dining scene is decidedly no-frills. Simple lunch spots thrive by day on the business of hungry and busy people buying and selling hardware – a meat-and-potatoes crowd. Any white tablecloth in these market streets is probably bound in twine and sold in bulk. Come nightfall, the streets are empty and the shops all locked up, not a hungry soul in sight. It seems even the streetlights in this part of town don’t bother to do their thing. Which makes the appearance of Grifin, a high-end seafood restaurant with an up-the-Bosphorus vibe and sweeping views, a baffling culinary mirage.

But the restaurant, tucked inside the dangerously ramshackle and charmingly decrepit backstreets of the Perşembe Pazarı, makes a little more sense up close. It is located on the top floor of the same building as the old seafood standard Tarihi Karaköy Balıkçısı (TKB, from here on), a lunch spot long considered one of the best addresses in town for a no-nonsense, pure fish dining experience. Grifin is, in fact, the nocturnal alter ego of the downstairs TKB, sharing a kitchen, menu and waitstaff.

Cocktails are served on the rooftop terrace, which brings you unimaginably close to Istanbul’s Old City, a panoramic vista that restaurateurs and diners alike dream of. Who wants a 360-degree view of shabby rooftops when you can have 270 degrees of unobstructed magic? Large windows in the dining room below ensure that there is not a bad seat in the house.

Relieved to find all of the old favorites from TKB on the menu, we started the meal with a bowl of fish soup – more a chowder than a bisque – teeming with tasty chunks of fish, diced potatoes, carrot slivers, bay leaves and lemon. Among the hot appetizers was a unique tempura-like dish made with hamsi (fresh anchovy), the batter crisp and light and slightly sweet, almost like a churro. Our table approved and ordered a second round of this appetizer, along with a fine calamari whose garlicky yogurt sauce tasted just fine on a piece of bread once the squid ran out.

There is no showmanship on the fish side of the menu. No special sauces or pyrotechnics. Extremely high standards of quality and freshness, meanwhile, keep the daily fish offerings minimal. Fortunately, on the menu were two of our TKB favorites: the sea bass cooked in paper, kağıtta levrek, and the grilled skewer of sole, dil şiş.

The sea bass arrived steaming in its paper vessel, the boneless flesh succulent and tender. A fragrance of tomatoes, peppers and lemon wafted out at us, leaving most of the table wishing that this was their entrée. A similar effect was created by the dil şiş, plump little fillets of sole that were rolled up and grilled on a skewer and that seemed to be channeling a sea scallop with their sweet flesh and creamy texture.

At roughly $70 a head (including domestic booze), Grifin is positioning itself to compete with the fancy fish houses along the Bosphorus. With the reputation of TKB to back it up, this place should quickly appear on the jet set diners’ radar. But for now, at least, it still feels a lot like a dressed-up version of its downstairs partner – an unpretentious local spot, albeit one with white tablecloths.