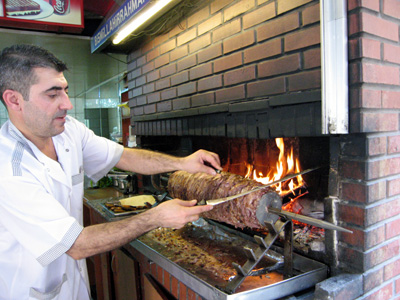 We were alarmed to recently discover that one of our favorite spots, Erzurum Cağ Kebapçısı [1] in Karaköy, had closed down. Turns out the owner returned to his former job – being an electrician.

Istanbul has plenty of kebab joints, but places serving cağ are sadly hard to find. Originating in the eastern Anatolian province of Erzurum, the kebab looks like a horizontal döner, but tastes otherworldly. If South American cowboys somehow found themselves in Erzurum’s grassy Turkish steppe, they would surely be struck down with déjà vu at the sight of this carnivores’ fantasy, turning slowly over a hardwood fire. The way we see it, cağ is the Turkish equivalent of Argentina’s asado or the Brazilian churrasco, a kebab for serious meat lovers.

Fortunately, we’ve found an excellent place to keep getting our cağ fix, Şehzade Erzurum Cağ Kebabı, not far from the Sirkeci train station and the Sultanahmet area. The restaurant’s location, on the pedestrian-only Hocapaşa Sokak, is a winner. Lined with restaurant after restaurant serving superb traditional Turkish food (and home to Kasap Osman [2], an Istanbul Eats favorite), we like to think of Hacapaşa Sokak as a foodies’ fantasy food court. One could easily spend a half day there, working their way through the street’s restaurants.

Şehzade Erzurum Cağ Kebapçısı, at the entrance to Hocapaşa Sokak, has only a handful of tables, all within whiffing distance of the spit, where cuts of lamb expertly marinated slowly cook over a wood fire. As the horizontal spit slowly turns, the meat continuously bastes itself, occasionally flaring up with a sizzle and a pop that chars an outlying corner of meat. Unlike döner, where the dönerci saws and hacks from his vertical spit, leaving the meat he has cut off lying in a puddle of grease, the cağ man carefully selects each morsel of meat from the spit with a sharp knife and a small, thin skewer. A dönerci’s work has more in common with that of a lumberjack, but doing cağ right requires the patient and steady hands of a skilled surgeon (or, come to think of it, a good electrician). When he’s done, he’ll present you the skewer, threaded with a precious collection of tender yet crispy bites, served on top of a toasty, warm piece of lavaş.

Compared to the now-defunct spot in Karaköy, which served up cağ and nothing but, Şehzade has a slightly more expansive menu. Along with our kebab, we had a hearty red lentil soup to start our meal and a small plate of piquant ezme (a salad of finely chopped tomatoes, onions and parsley) to go along with the meat. The restaurant even serves a very tasty dessert: the state-fair-worthy kadayıf dolma, a fat torpedo made out of shredded wheat wrapped around a core of chopped nuts and then deep-fried and doused with a sticky sweet syrup.

With its prime location and steady clientele, it would appear that this cağ kebab place is not in danger of closing down any time soon. Just to make sure, though, before leaving we asked the spit master if he had previously worked as an electrician. His answer, an emphatic “no,” left us feeling at ease.