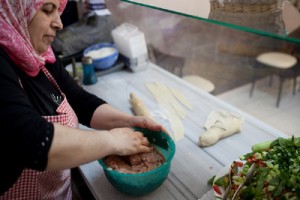 The mini dumpling mantı, a dish that traces its roots to the mobile kitchens of nomadic Turkic tribes in Central Asia, is often referred to as “Turkish ravioli.” But could the Turks have beaten the Italians to the punch? Is it ravioli that should actually be called “Italian mantı?”

We’ll never know for certain, but we do know that finding a plate of well-made mantı in Istanbul can sometimes be as tough as finding authentic ravioli. Which is why we were very excited to be introduced to Gönül Abla (“Big Sister Gönül” in Turkish), a heavenly mantı spot in the leafy Asian side neighborhood of Moda.

Owing to its rustic roots, mantı is a rather humble dish (yet one that packs a surprising amount of flavor). To make the dumplings, an elastic dough is rolled out thin and cut into long strips, from which little pockets of dough filled with minced lamb and onion mixture are made and then dunked in a pot of gently boiling water for a few minutes. When ready, the steaming little dough packets are topped with garlic-infused yogurt, creating a very pleasing combination of hot and cool.

So, why go potentially out of your way to Moda, and then to Gönül Abla for dumplings? Well, first of all, if you’re coming from the European side you have the pleasure of the ferry crossing and a pleasant walk along the seashore to Moda. Then, of course, there’s the mantı itself. Most restaurants in Istanbul prepare their mantı in advance in the morning, just boiling it up as required. At Gönül Abla, on the other hand, they make it to order, mixing the filling, rolling the dough and cooking it up right there and then. In short, you’re going out of your way to have probably the freshest handmade mantı you’ll find in Istanbul. (The restaurant also serves up other traditional home style dishes as well. The köfte was marvelous, and the çiğ börek, a kind of fried meat pastie, is also worth a mention.)

Like manti itself, Gönül Abla – with its handful of tables and low-key setting – is humble and unassuming, but packs a mighty punch.