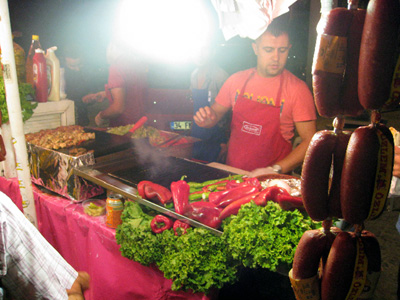 Just as London’s Savile Row is known for its tailors, and New York’s Canal Street for its cheap handbags, Kadırgalar Caddesi in Istanbul is surely known to all as sucuk central. On any given evening, in this street running between the hills of Maçka Parkı and the nearby Açıkhava Tiyatrosu, or open-air theater, the sidewalks are alive with itinerant sausage stands. And one weekend, we tried them all.

Sucuk is a dried sausage eaten throughout the region surrounding Turkey, with slight variations on the same theme of ground beef, spiked with salt, red pepper and other spices. Prior to hitting the grill, it is not the most appetizing sight, usually found hanging from hooks in supermarkets and butcher shops in uniform crimson links that look like a beaded curtain of very fat hot dogs. But it is once relieved of its paperlike casing, chopped into bite-size chunks and put on the grill, you understand what all of the fuss is about. The charcoal fire quickly revives the sausage from its sheathed slumber into sizzling disks that let off an aroma trail that can bring traffic to a standstill, as it does on Kadırgalar Caddesi.

Though some stands favor Özlem brand sausage and others swear by Coşkun, aside from the way the sausage is cut – into disks or two-inch rough chunks – we found little difference between the resulting sandwiches. To us, they were all similarly tasty. Perhaps it was the corner location with a small patch of parking lot for his plastic tables and chairs, but we were particularly drawn to Mehmet Ercik’s setup. He’s been slinging sucuk on these streets for more than a decade. Up until recently, he was doing it from inside a popular minivan he parked across from the entrance to the theater. While frantically waving in customers as he fanned the coals on his grills, he explained, “Those days were like honey, back when I had my van. But the municipality said, ‘no van.’ So now I’ve got this stand. But I’m still here.”

The sucuk is served on a half loaf of white bread or on lavaş. We prefer the latter with grilled peppers, onions and an additional blast of red pepper paste (just say “acılı olsun”). Perhaps not the most sophisticated sausage-eating experience, a sucuk sandwich is satisfying in the same way that a Chicago hot dog “with everything on it” can be – the whole is definitely greater than the sum of its parts.

In warm weather, the sucuk stands set up along Kadırgalar Caddesi around 9 p.m. and keep grilling into the early morning hours, depending on demand. With any luck, by the time winter rolls around, Mr. Ercik will have the minivan back in operation so we can enjoy his fine sucuk wrap throughout the year.