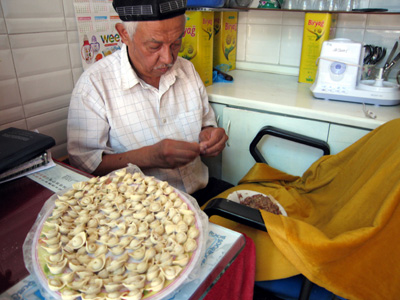 With the particularly un-catchy name of Doğu Türkistan Vakfı Aş Evi (or East Turkistan Foundation Food House), it’s clear this restaurant is not aiming for mass-market appeal. Rather, the place functions as a kind of public service agency. Located inside the charming and very pleasant courtyard of a 16th-century former medrese (religious school), Doğu Türkistan Vakfı Aş Evi (DTVAE from here on) serves up hearty dishes for homesick exiled Uighurs, a Muslim Turkic people who hail from Western China’s Xinjiang province, or “East Turkistan” as it is known in Turkey.

Turks and Uighurs share a linguistic bond, and many in Turkey romantically think of the Uighurs as the “original” Turks. But the two peoples also share a strong culinary bond, with Uighur cooking providing perhaps a blueprint of what the “original” Turkish cooking might have tasted like. Where the classic Turkish kitchen reflects a mix various regional influences (Aegean, Middle Eastern, Balkan) and the highfalutin tastes of the Ottoman court, Uighur cooking retains the simplicity of a formerly nomadic people. So simple, in fact, that the menu at DTVAE is basically limited to three items – and two of them are different takes on mantı, the traditional Turkish dumpling.

The restaurant’s centerpiece dish is lagman, a main staple of Uighur cooking, which is made from handmade noodles that are boiled and served along with a stir-fry of beef, onions and green peppers. On our recent visit to DTVAE, the head-scarved cook was busy in the kitchen rolling out long strips of lagman, which somewhat resemble udon noodles. In another room, an older man was methodically stuffing small pockets of dough with a ground meat mixture to make one of the restaurant’s mantı dishes. Boiled and then topped with yogurt and red pepper flakes, the mantı was delicious, putting most of the other versions found around town – which seem to favor dough over filling – to shame. The restaurant’s other mantı dish – a much larger dough pocket that was stuffed with a meat/onion mixture and reminded us of a Chinese soup dumpling – was also very nice, especially when eaten with a schmear of the oily, red pepper paste that we found in a jar on the table.

DTVAE has a few outside tables, where you can eat under the shade of three massive maple trees, and a handful of tables inside. The restaurant – a peaceful oasis located on a side street not far from the grand Süleymaniye Mosque – is connected to a Uighur cultural center housed inside the madrasa, and on a recent visit, the place was plastered with copies of articles from the Turkish press reporting about the recent ethnic violence in Xinjiang, in which some 200 Uighurs and Han Chinese died. Nearby us sat small groups of Uighur men chatting and slurping up their lagman along with bowls of steaming green tea, transported back, as we were, to East Turkistan.