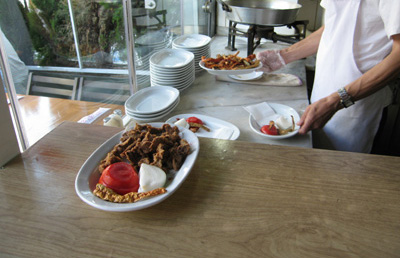 We’ve written previously about Turkey’s passionate love affair with liver, one that can turn downright obsessive in some parts of the country. Edirne, an old Ottoman capital city about two hours out of Istanbul, is one of those places. Filled with restaurants selling the dish and nothing but, Edirne is perhaps ground zero for Turkish liver lovers. If the city’s countless liver restaurateurs had their way, Edirne’s official symbol would probably be the organ, with a giant, quivering liver sculpture greeting hungry travelers at the entrance to town. Of course, that kind of boosterism is unnecessary; for many Turks, the name Edirne is simply synonymous with liver.

We visited Edirne several years ago and had what was a very fine plate of liver done in the local style. Although we’re not liver-mad enough to make the drive to Edirne just to eat the stuff (as some Istanbulites do), we were very happy to discover a few months ago Can Ciğer, a small spot in the Besiktaş neighborhood that is one of the few places in Istanbul serving up Edirne-style liver.

The formula for making the dish is simple: extremely fresh cow’s liver is sliced into very thin, almost bite-size pieces, coated with flour and then deep-fried until crisp and approaching something that could be described as Liver McNuggets. On the plate, the liver is served with nothing more than a hunk of raw onion, which complements the fried slices of meat perfectly; a few slices of tomato; and a hot pepper that has also been deep-fried. As at most Edirne liver restaurants, the main feature of Can Ciğer is the frying station at the front, where the Edirne-born fry master stands in front of a deep pan of oil that he tends to carefully, constantly adjusting the flame below.

The attention he pays to the oil shows off in the liver. On a recent visit, the meat was perfectly fried and – perhaps because of its thinness and crispy coating – had none of the “livery” taste we usually associate with the dish. Sitting around us, meanwhile, were local liver freaks, some who had even ordered a double portion of the crispy nuggets, clearly happy that instead of having to go to Edirne to get their fix, Edirne had come to them.