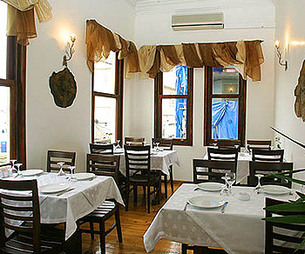 They might as well have named Melengeç the “Solar Eclipse” or the “Dodo Bird,” because, in the handful of meals we’ve had at this cozy Arnavutköy restaurant, its namesake dish, melengeç, made from the green leaves of a tree from the Aegean shores, has not once made an appearance at the table.

Luckily, there was no shortage of competent substitutes. On a recent visit we sampled no fewer than four different and unusual greens, all remarkably different. In a country where even an innocent-looking plate of rice usually conceals some form of meat, Melengeç’s wide variety of purely vegetarian offerings is a pleasant change of pace. Complemented by laid-back service in a tastefully decorated old wooden home, Melengeç sets the stage for a fine evening on the Bosphorus.

The shores of the Aegean Sea, from where the owner/operators of Melengeç hail, must be overrun with seaweed: Day-Glo spiny ones, fluffy dry ones, twiggy dark green greens. So apparently sophisticated is the Aegean taste for its weeds that Melengeç has two separate meze trays, both monopolized by little plates of greenstuff. The selection process can be a bit overwhelming, so we relied on the advice of our waiter, who steered us toward the house favorites.

Some were bitter, others sour, one had a garlicky kick and one kept slipping off of the fork. We were pleasantly surprised by the contrasts in flavor and texture presented by a few plates of greens all stewed in olive oil and then chilled. Among the many greens, the deniz börülcesi (“sea samphire,” as it is known in English) was most appealing.

But the star of the meze tray is surely the kabak çiçeği dolma, stuffed squash blossom, served with a dollop of strained yogurt. A plate of these – which were stuffed with fragrant rice and dressed with a drizzle of Aegean olive oil – emptied quickly, forcing us to call for more.

Along with the second round of dolma, we ordered one of the house specials, patlıcan balık (literally “eggplant fish”), presumably resembling fried fish to whoever wrote the menu. The light, airy slices of eggplant fried in batter reminded us of tempura and, pleasantly, tasted the part.

As eccentric as the starters were, there is, sadly, nothing remarkable about the main courses. Tire köfte, or Aegean-style meatballs, were welcomed by those who can’t leave the table without a bit of meat, but certainly don’t compare to other köfte found around town (see: Köfteci Hüseyin: The Cadillac of Meatballs [1]). Keşkek, a hulled wheat and lamb porridge, is an effective belly-filler, but we found it bland in comparison to Melengeç’s other specialties. In many ways, making a meal out of the restaurant’s hot and cold mezes might be the best way to appreciate its menu.

Despite its shortcomings, we find ourselves drawn back to Melengeç, perhaps in an effort to finally understand what makes this quirky restaurant tick. Of course, we are also secretly hoping that on one of these visits we might also get a chance to taste that elusive and mysterious melengeç.