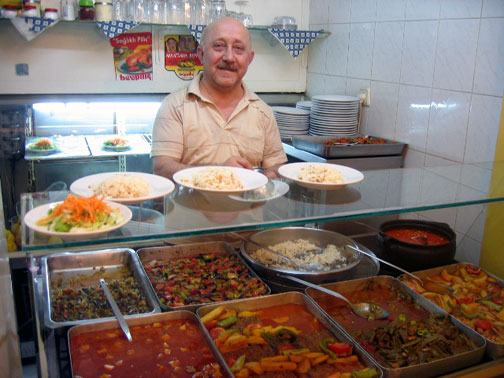 We usually steer clear of the touristy Old City district of Kumkapı, where you are more likely to be accosted by an aggressive maitre d’ trying to corral you into his overpriced fish restaurant than to find something simple, tasty and reasonably priced to eat. Sadly, in order to beat the competition next door, most of Kumkapı’s famed fish restaurants seem to have invested more in aggressive customer corralling tactics than in kitchen talent. However, tucked into the neighborhood’s backstreets, we’ve found a few hidden dining gems that locals in the know frequent.

When in the area, we skip Kumkapı’s fish restaurant strip and make a beeline for Doyuran Lokantası, a serious little eating sanctuary on a nearby side street. The men at the next table might be wearing spackle-crusted work shirts and have measuring tapes on their belts, but they know their food. In most Istanbul neighborhoods, the working class sets the culinary bar, and they set it high. They want it fast, fresh, cheap and as close as possible to their mothers’ recipes. Offering up four or five daily lunch specials, including homemade Turkish dumplings (mantı), chickpeas over rice and an assortment of traditional stews, Doyuran’s husband-and-wife team answers the working man’s call with ease, the service both professional and homey.

“Bismillah,” said owner/operator Musa Ergenç, calling on the name of God as he cut the first piece of a steaming musaka from a large pan on a recent visit. And heavenly it was upon arrival at the table – the eggplant richly saturated but not too oily. Unlike the Greek version, which is usually topped with a creamy béchamel sauce, the top layer of Doyuran’s musaka consists of a refreshing blast of chopped tomatoes. In order to try as many of the day’s specials we ask for small portions, or “az.”

Ispanak yemeği, a steam table standard of stewed spinach and rice more associated with filling the belly than exciting the senses, here provoked a double take. This didn’t look or taste anything like the heavy, overcooked green mush we’ve become accustomed to elsewhere. This one had a made-to-order feel, with each flavor presenting itself separately, from the fresh spinach to the light tomato-sauce base. A dollop of yogurt on the side, if requested, thickens the last few bites into something pleasantly spoonable and leaves the dish with a cool finish.

Though Doyuran’s dessert puddings are perfectly passable, around the corner something truly phenomenal awaits to satisfy the sweet tooth. Boris’in Yeri has been keeping Kumkapı’s restaurants and residents stocked with bal-kaymak, a rich buffalo milk cream served under a blanket of honey, for almost a century. And from the looks of the place, little has changed since Boris first opened shop. Old cracked tile floors, marble tables worn from use and a pair of stainless-steel coolers the size of Buicks are about the only décor you’ll find here. Like at Doyuran’s, the focus here is on the food, not on trawling for customers. With food this good, they come on their own.