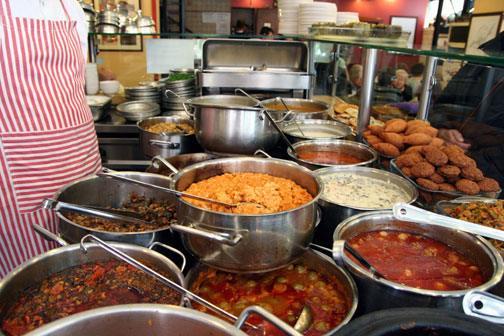 For us, one of the highlights of spring in Istanbul is a visit to Çiya Sofrası, the Asian-side eatery that is very likely the best restaurant in Istanbul. It’s certainly not the fanciest or most cutting-edge place in town, but we rarely leave Çiya without having a profoundly new and memorable taste experience. Thanks to glowing write-ups in numerous other places, Çiya – along with a sister restaurant across the street serving excellent kebabs – is no longer the off-the-beaten-path secret it once was. But the restaurant – located on a quiet, pedestrian-only street in the Kadıköy neighborhood’s bazaar – has remained true to what has made it successful in the first place.

That success comes from the vision of owner and chef Musa Dağdeviren, who hails from the southeastern Turkish city of Gaziantep and who is something of a culinary anthropologist, collecting recipes from around Turkey and even publishing a journal devoted to Turkish food culture (Yemek ve Kültür [1], sadly, only in Turkish). The end result of Musa’s digging and collecting is a menu that features unusual regional dishes that you will very likely not find anywhere else.

What’s on offer changes daily (there’s always a variety of vegetarian dishes), which means there isn’t an actual menu. Instead, ordering is done by walking up to a chef who watches over more than a dozen bubbling pots and other dishes containing prepared food and pointing to what looks interesting. The “menu” also changes according to what’s in season – and in springtime things can get downright funky at the restaurant. On a recent visit, we ate a delicious meat stew cooked with bracingly tart unripe green plums, as well as keme, a mushroom found in central and eastern Anatolia that we like to think of as a Mesopotamian truffle. Cut up in slices and grilled on a skewer, this hearty fungus tastes like an earthy cross between a Portobello mushroom and a very delicate potato. Also available this time of year is an item called yenidünya kebabı – made with pitted loquats that are stuffed with ground meat and then grilled – as well as artichokes stuffed with rice and herbs. On another visit, we also had very tasty and unusual dolma (stuffed grape leaves), which were filled with rice and lor, a kind of farmer’s cheese, and topped with caramelized onions.

As much as we enjoy visiting Çiya in spring, we certainly are not opposed to eating there in summer, winter or fall. With the food this good, it’s a restaurant for all seasons.