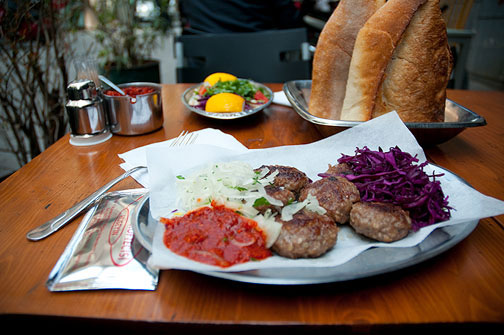 Editor’s note: After the unfortunate collapse in February 2016 of the building that housed Köfteci Hüseyin, the business is hoping to reopen elsewhere in the neighborhood. We’ll keep readers posted.

We prefer to retreat from the köfte wars of Sultanahmet and get our fix from Köfteci Hüseyin, a more humble purveyor in Beyoğlu, who got his start selling meatballs from a pushcart grill some 40 years ago.

Although at one point the cart was traded in for a tiny storefront just off of Taksim Square, Hüseyin still keeps it very real, with some of the best meatballs in town. On the wall is a picture of the founder from the days when he had little more than a mustache, a pair of tongs and his old grill on wheels. Though Hüseyin has since passed on, before doing so he bequeathed his tongs to his son, who now works the grill and maintains a winning recipe that combines quality, consistency and low prices.

Enter this humble shoebox of an eatery and before you can grab a seat you’ll be asked, “One portion or one and a half?” Shortly thereafter, “Side of beans?” (An order of piyaz, a salad of white beans and onion, is to köfte what coleslaw is to BBQ. Dressed in olive oil and vinegar and served chilled, this classic side is a köfte house mainstay that shouldn’t be missed.) That’s about all there is to ordering in a traditional Turkish köfte joint – and tradition is what Köfteci Hüseyin is all about.

Köfteci Hüseyin may be a classic spot, but its handmade patties do distinguish themselves from the rest. While some places lard their meatballs with breadcrumbs, giving their köfte a somewhat rubbery consistency, Hüseyin’s patties have an unusually high meat content. Hüseyin’s silver-dollar-sized patties are also quite plump, allowing them to remain juicy inside while their exterior gets pleasantly charred on the grill.

Sit down for a portion and a half of Hüseyin’s köfte, served along with a big hunk of fresh bread, a dollop of spicy red pepper sauce and fresh chopped onions, and you will understand why these are not “just meatballs.”