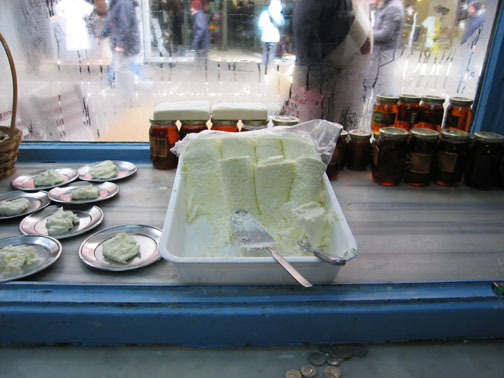 In our imagination, kaymak – the delicious Turkish version of clotted cream – is the only food served in heaven, where angels in white robes dish out plate after plate of the cloudlike stuff to the dearly departed, who no longer have to worry about cholesterol counts and visits to the cardiologist.

Perhaps we’re getting carried away, but kaymak can do that to you. For our money, the classic Turkish combo of kaymak served with honey and crusty white bread is one of the finest breakfasts anywhere.

The stuff is glorious, but simple. Milk – preferably from domesticated water buffaloes, known as “manda” in Turkish – is slowly boiled until a thick layer of very rich, pure, white cream forms at the top. After it cools, the kaymak is rolled up into little logs that have a consistency that hovers somewhere in between liquid and solid, with a creamy taste that’s both subtle and rich at the same time.

The stuff is also quite delicate, with a shelf life of barely one day. Still, purists refuse to refrigerate it, lest it lose its texture and pick up any refrigerator odors. Like we said, kaymak can make people get carried away.

Two of our favorite places to try kaymak are:

Beşiktaş Kaymakçı – This tiny shop/eatery has been in business since 1895, and it certainly shows its age. The marble counter is cracked and the paint on the walls peeling. But the kaymak, served up by the 84-year-old Pando, a living institution in Istanbul’s untouristed Beşiktaş bazaar, is out of this world. Prices here also seem unchanged since 1895: a plate of kaymak and honey, served with fresh bread and a glass of steaming hot milk, will set you back 4 lira.

Karaköy Özsüt – Compared to Pando in Beşiktaş, this place – open since 1915 – is a relative newcomer to the kaymak scene. Located near the Karaköy waterfront, Özsüt also serves up very good kaymak (as well as yogurt and rustic cheeses) made from the restaurant’s own herd of water buffaloes, whose pictures grace the walls.