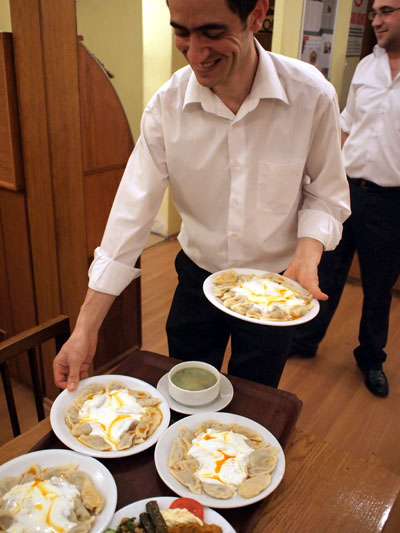 [1]
According to our Turkish-English dictionary, the word “Çerkez” means “Circassian,” but in our book it is synonymous with “delicious.” As evidence, look no further than Fıccın, a friendly restaurant serving the unique cuisine of the mountains of the Caucasus. Many Turks trace their roots to this culinary Xanadu, including the folks over at Fıccın, who have put together a Turco-Circassian menu that includes specialties from both kitchens.

Cold chicken and walnut spread (Çerkez tavuğu), found on many Turkish menus, is here a bit richer and redolent with red pepper and garlic. Tulen, an aromatic chicken soup, is an unusual surprise in a country so loyal to the lentil. Shreds of chicken lace the thick slow-cooked stock, whose garlicky essence travels with the steam nose-ward – a whiff of ecstasy.

The Çerkez take on the dumpling is similar to a pierogi, filled with meat or potatoes and served in a bath of yogurt and light red pepper oil. Though the menu describes the restaurant’s namesake dish, fıccın, as Circassian börek, this is not the little flaky pastry sold throughout Turkey. In this case, savory, almost cake-like dough is layered over fragrant ground meat and then baked like a pizza. One slice of fıccın is best shared among the table.

Unfortunately, the Çerkez dishes on the menu stop here. On the other hand, Fıccın’s Turkish standards – though found on the menus of numerous other restaurants – are particularly well made. Notable among them is the sublime karnıyarık, baked eggplant stuffed with peppers, onions, minced meat and tomatoes.

Though open for dinner, Fıccın thrives on its bustling lunch scene, when its three dining rooms and clusters of outdoor tables fill quickly. Turnover is quick, but be sure to come early or you might miss the daily specials.