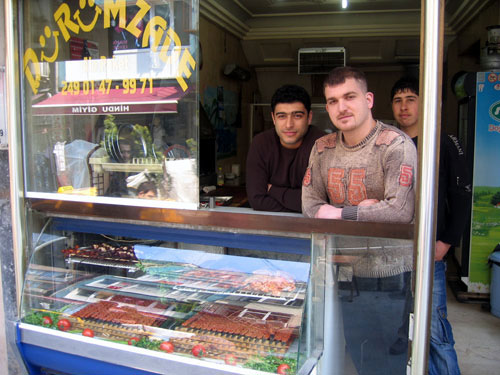 Istanbul’s after-midnight dining options tend to be of the offal variety – tripe soup, chopped lamb’s intestines – thought to be curatives after a night of hard drinking. Luckily, not all late-night eats in the city involve innards. At Dürümzade – a grill joint positioned right on the fringe of the rowdy, bar-lined streets of the Beyoğlu’s fish market – we’ve found a dürüm, or Turkish wrap, that’s equally satisfying at 2 a.m. or 2 p.m.

If a sandwich is only as good as its bread, then any dürüm discussion is all about the lavaş, the Turkish tortilla that’s used to make it. Dürümzade’s thin ovular lavaş, rubbed with a mix of red pepper and spices, is far from the stiff, uniform discs found at many other dürüm joints. Like a good thin pizza crust, Dürümzade’s lavaş is filled with textural variations, bubbles, crispy edges and moist, chewy pockets. Stacked and hidden away, it incubates in a drawer below the charcoal grill.

The glass cooler at the front of the restaurant holds the choices for filling the lavaş: chicken kebab (tavuk şiş), spicy minced beef (Adana kebab) or mild minced beef (Urfa kebab). (Chicken wings are also on offer, but since you can’t wrap them in flatbread they are not a part of this discussion.)

The skewered meat is put on a grill, which is fanned to the desired heat by the portly fellow guarding the lavaş. After one rotation of the skewer, out comes the wrap from its drawer. The grill master then drapes it over the kebabs cooking over the coals, creating a smoky tent for the meat while keeping the lavaş off of the fire directly. As the lavaş tent heats up, the spice rub on the wrap imparts its flavor onto the skewered meat below. While the lavaş is still flexible, the usta (“master” in Turkish) pulls it from the grill and covers it with a bed of chopped parsley, sumac-dusted onions and tomatoes, onto which he lays the freshly grilled meat from the skewer. Then, like a cowboy deftly rolling a cigarette, he makes the dürüm (which will set you back a measly 3.50 liras). But before handing it over to the now salivating customer, he puts the whole thing back on the grill for a final crisping.