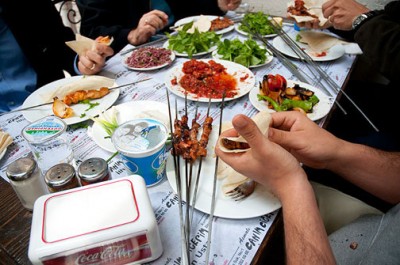 [1]
Canım Ciğerim, a very fun and tasty kebab spot in Beyoğlu’s Asmalımescit area, makes things easy. The menu only has two items from which to choose: liver, or what is simply referred to as “meat.”

Before we lose any more readers, let’s talk about the first option. Turkey exists in a kind of alternative culinary universe where liver is not the punch line of a joke or the basis of a bad taste memory that haunts you for the rest of your life, but rather something that’s sought out. In parts of eastern Turkey, ciğer (pronounced gee-ehr) often trumps other cuts of meat in terms of popularity. Edirne, a city near Turkey’s border with Bulgaria and Greece, is so famous for the dish that some Istanbulites make day trips there just to eat in one of its numerous fried liver restaurants. After several years in Turkey, we, too, have even found ourselves occasionally under liver’s powerful spell, our previous disdain for the organ now gone.

At Canım Ciğerim, the lively restaurant’s namesake dish (“canım ciğerim” is actually a Turkish expression that translates into “my liver, my dear,” and is used as a term of affection) is made from tiny cubes of tender lamb’s liver that are grilled over hardwood coals on long, thin skewers. The kebab is still unmistakably liver, but its taste and texture are much more delicate and simply less “liverish” than what you’ve probably had before. (If you want, ask your waiter for a “yarım porsiyon” – a half portion – of liver, just to give it a try.) Fortunately, for those not interested in taking the liver plunge, Canım Ciğerim’s “meat” (or et, in Turkish) option is an extremely fine one. In this case, small morsels of tender beef are skewered and grilled.

Either way, the real fun here is in what comes along with your kebabs. Before the skewers even arrive, your low table is piled high with plates of parsley, mint, arugula and slightly charred grilled onions and peppers dusted with red pepper. Along with those comes a serving of the restaurant’s superb ezme salad – a mix of extremely finely diced tomatoes, onion and parsley flavored with tart pomegranate molasses – which is made by a knife-wielding usta, or master, who lords over a well-worn cutting board near the grill.

The skewers arrive along with a pile of very thin flatbreads that look a lot like the wraps that are served with moo shu dishes in Chinese restaurants. The wraps are used to grab the meat off the hot skewers and are then filled with a bit of everything that’s on the table and rolled up, eaten in two or three flavor-filled bites. If you want, order a dürüm – a Turkish-style buritto – and the chef will do all the work and make a giant wrap for you stuffed with grilled meat, fresh herbs and onions.

The restaurant is open from noon to 5 a.m., so perhaps the only other choice you have to make is whether to come for lunch, dinner or an after-hours snack. But whether it’s liver or “meat,” we’ve found that having a bad meal at Canım Ciğerim is not an option.