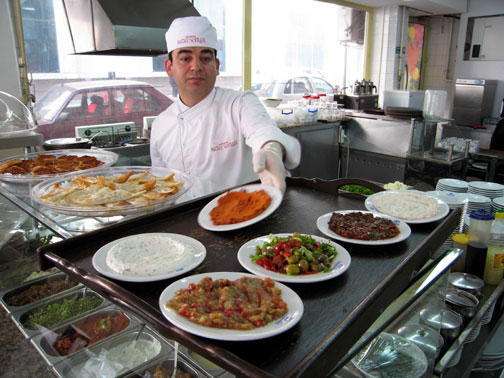 The only positive thing about the torturous annual visit we make to Istanbul’s main police station in order to renew our residence permit is the chance to drive through the low-rent Aksaray neighborhood, home to dozens of intriguing off-the-beaten path restaurants, most of them opened by migrants from other parts of Turkey.

On our last trip through the area, we noticed a large, newish-looking sign belonging to a restaurant called Akdeniz Hatay Sofrası. Hatay is the name of Turkey’s southernmost province, an area bounded by the Mediterranean and the border with Syria. Until the 1930s, the Hatay region was actually part of Syria, and the food from there is closer in spirit and flavor to what is found on menus in Aleppo or Damascus. Hatay, the restaurant, is run by a family that hails from the area and does brisk business serving up authentic and very good food from the region. On the several occasions that we’ve been there, the two-floor restaurant was packed with large groups, mostly families who also originally came to Istanbul from Hatay, sitting at long tables covered with countless plates of food.

Hatay’s Syrian roots are especially obvious when it comes to starters, where a creamy hummus – an item surprisingly hard to find in Istanbul – and a smoky eggplant and yogurt salad called mütebbel are the stars. Two zesty salads tossed with tart pomegranate molasses – one made with cracked green olives and another with za’atar, a wild herb that tastes something like fresh oregano – are also highly recommended.

The extensive main course menu has several kinds of kebabs and a rotating lineup of daily specials, mostly hard-to-find home-style soups, stews and savory tarts. But the menu’s real stars are two show stopping dishes: chicken or lamb stuffed with rice and baked in salt (tuzda tavuk and tuzda kuzu in Turkish), which need to be ordered at least two and a half hours in advance. Slow-cooked in a wood-burning oven, the meat is entombed inside a dome of rock salt and then the whole thing is wheeled to your table on a cart. A waiter then douses the dome with a clear flammable liquid, while another waiter lights it and runs away as the salt erupts in a massive burst of fire that would be the basis of a lawsuit in most other countries, but here is all part of the fun. Once the flames have died down, a waiter returns with a mallet and an industrial sized chisel and cracks open the salt to reveal steaming, succulent meat (and in the case of the chicken, deliciously crispy skin).

If you still have some room left for dessert, try Hatay’s excellent künefe, a traditional Middle Eastern sweet made out of a mozzarella-like cheese sandwiched between layers of crispy shredded wheat and doused with a sugary syrup (believe us, it tastes better than it sounds).

Hatay is a quick cab ride from Beyoğlu (and even closer to the Sultanahmet area) and we have recently found ourselves going there more and more. In fact, we’re already looking forward to next year’s visit to police HQ.